[ A VERSION OF A TINY MULTIFUNCTIONAL HIDDEN AREA ]

The main core of this version of interior design was the construction of a multifunctional space. I have put several functions of a house such as a work place and storage into single pull-out cabinets that stand in one frame. If I needed a function such as a workstation, I pulled out the cupboard with the appropriate concept and used the free space as a working area. Temporarily, the free space turned into a functional space. When I no longer worked, I put everything together and stowed it back in the frame.

The rest of the room became a multifunctional space.When I needed something, I pulled it out and transformed the remaining space temporarily into a functional space. For every function I had a space of several square meters although my tiny house has 10sqm.

HIDDEN TINY WORKSPACE was the first part of the special concept. If I wanted to work, I pulled out the left cupboard, turned it around and pushed it at the same height as the front of the right cupboard. So I had a closed front and the space behind it wasn’t visible. 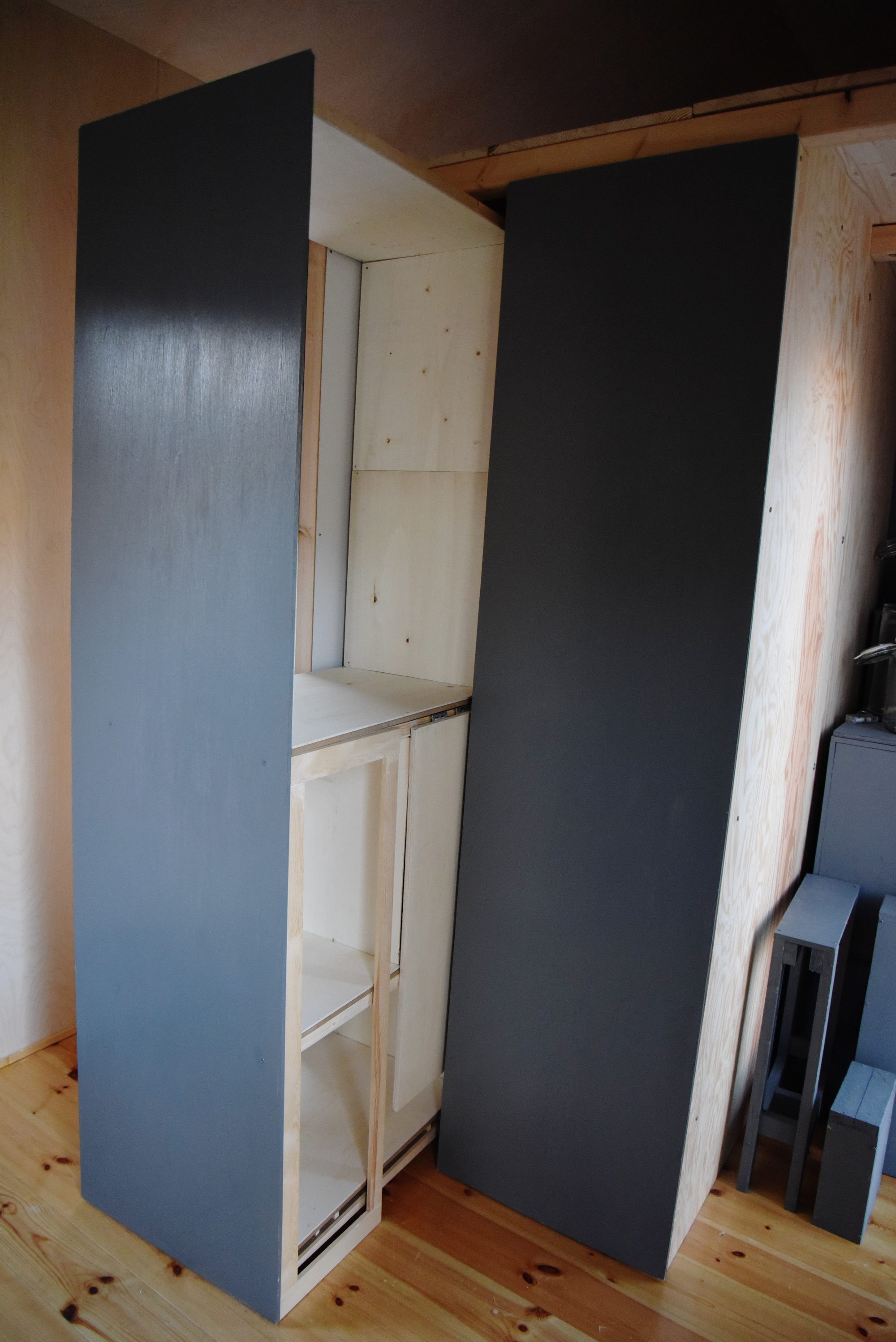 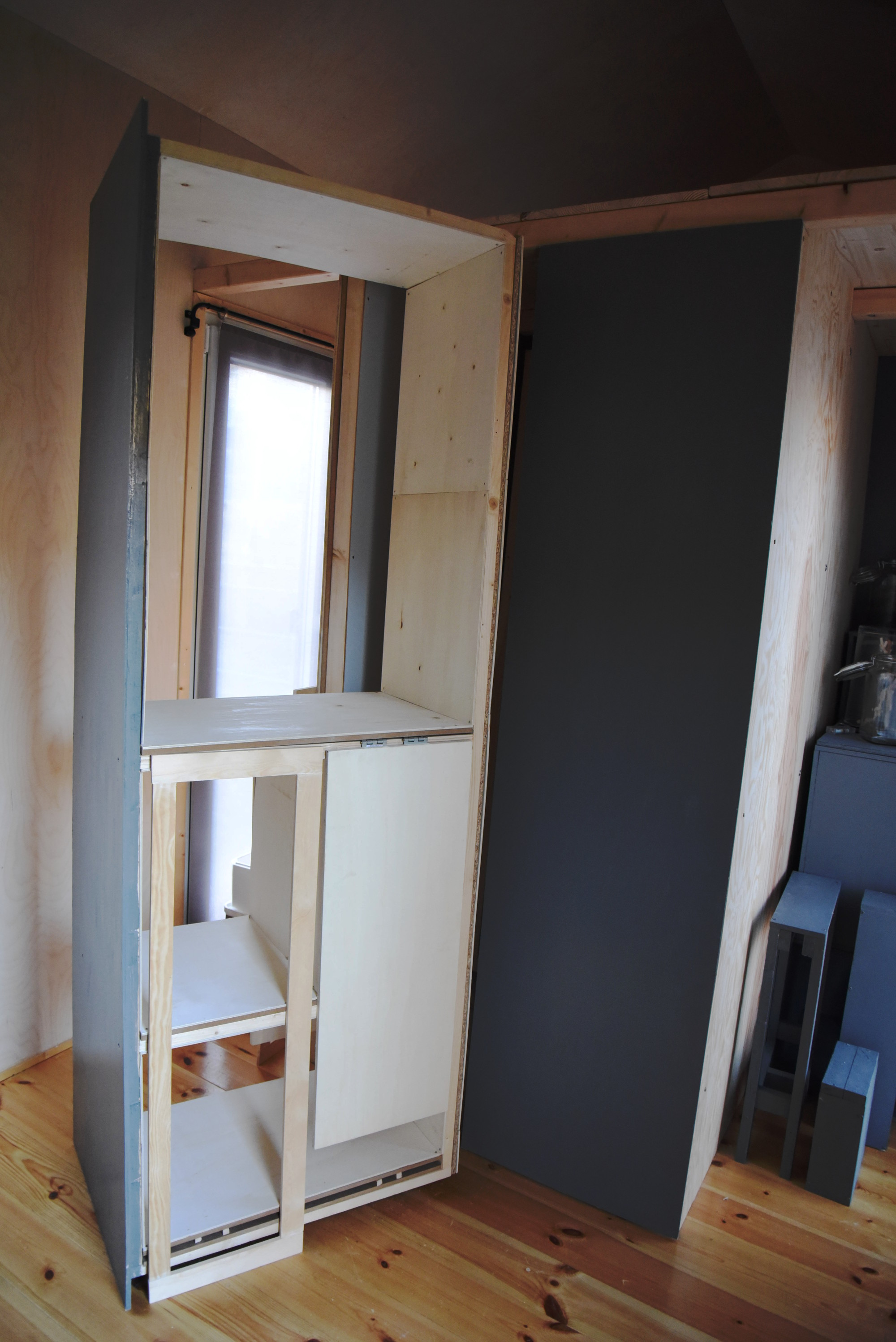 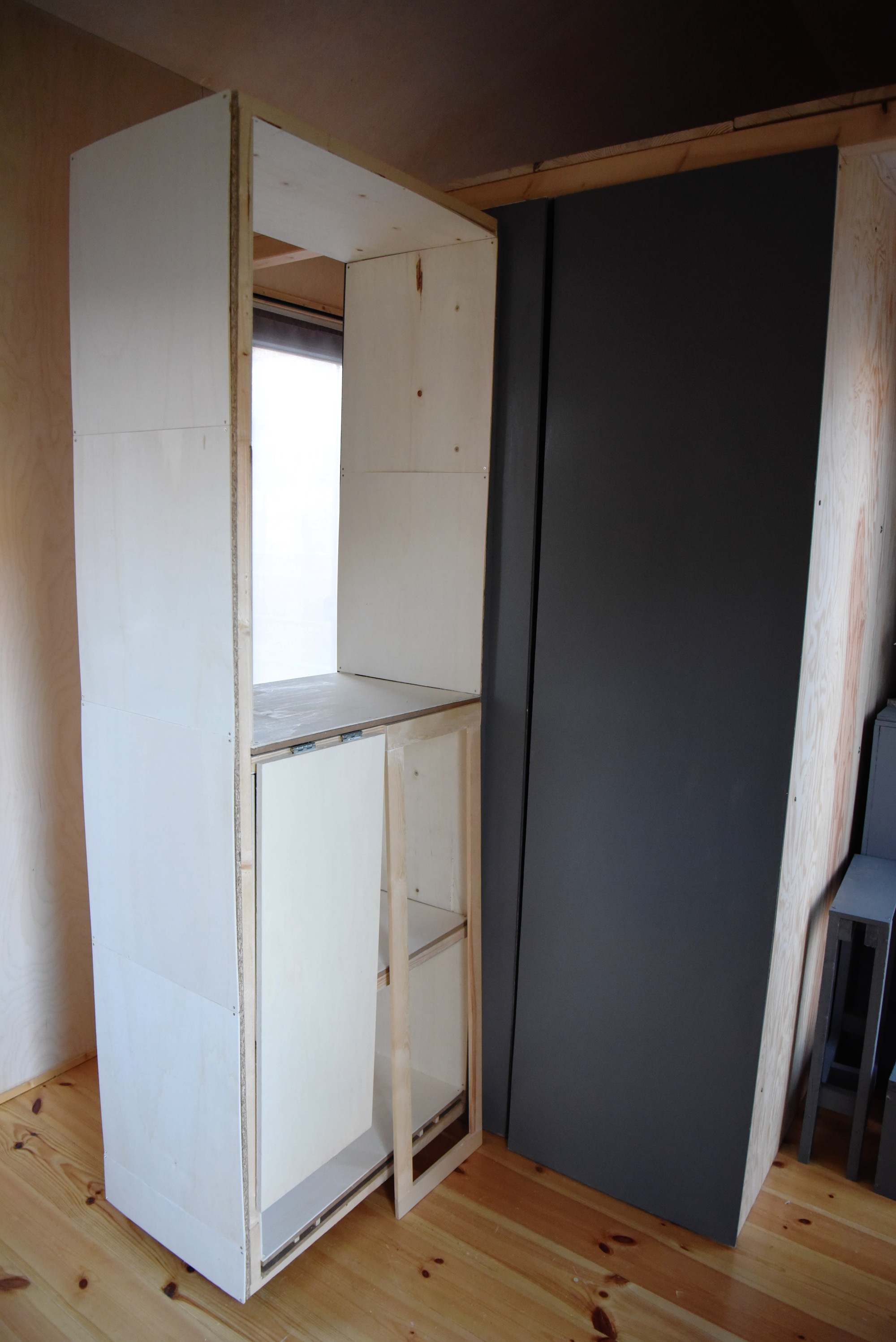 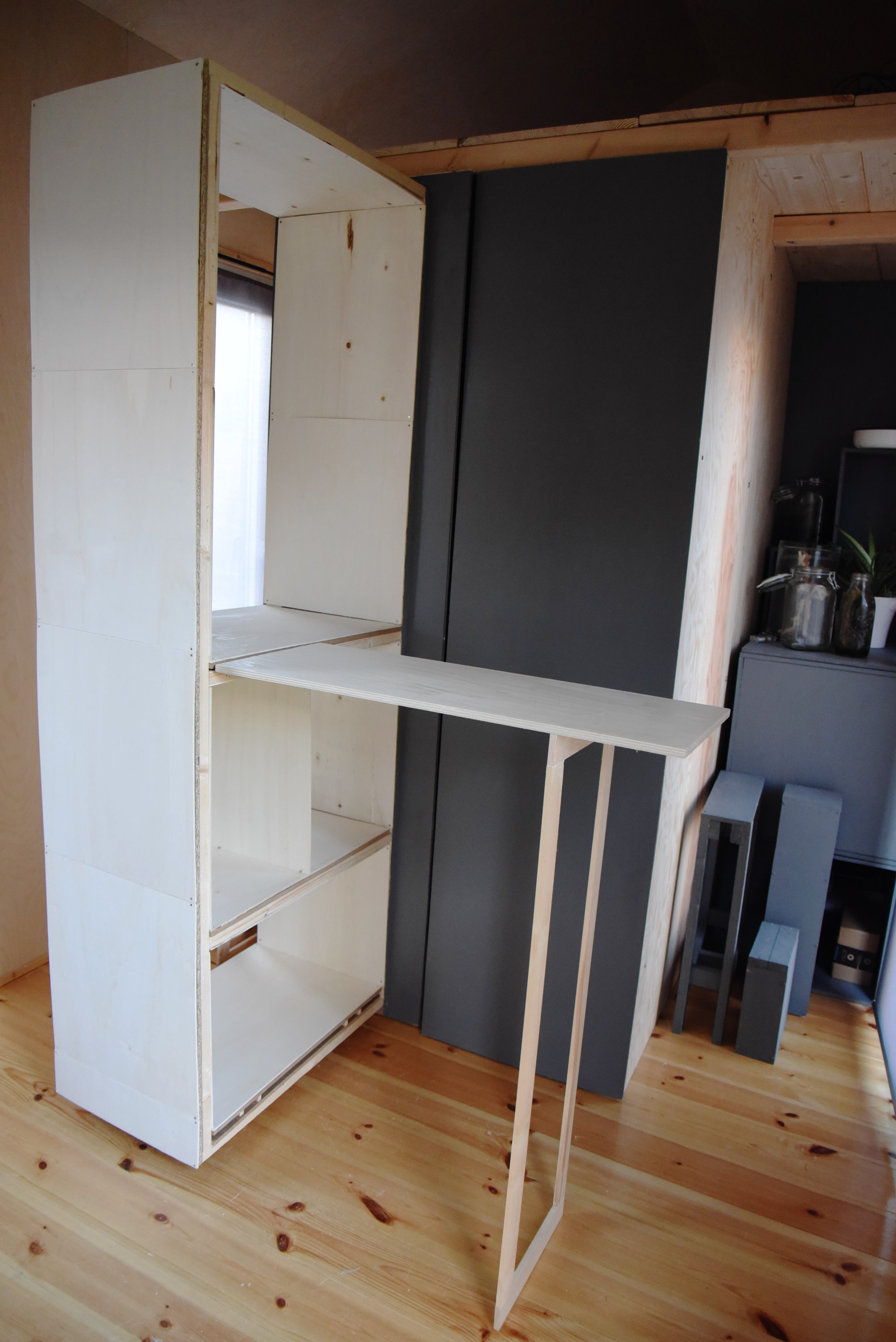 In the CUBE AREA was an element – the small stool. To have a seat I could take and place it to the table. I could use the the area in front of the cupboard as a multifunctional room. The room became in this moment to my workspace and I could use the whole space to work.If I had a guest and worked with him I could fold up the second table and he had his own table and space.

With this method I could quickly transform the multifunctional space back to its original design without having to completely clean up my workplace – only folding the table and putting the small stool to the CUBE AREA, turn around and push the cupboard in the HIDDEN AREA. 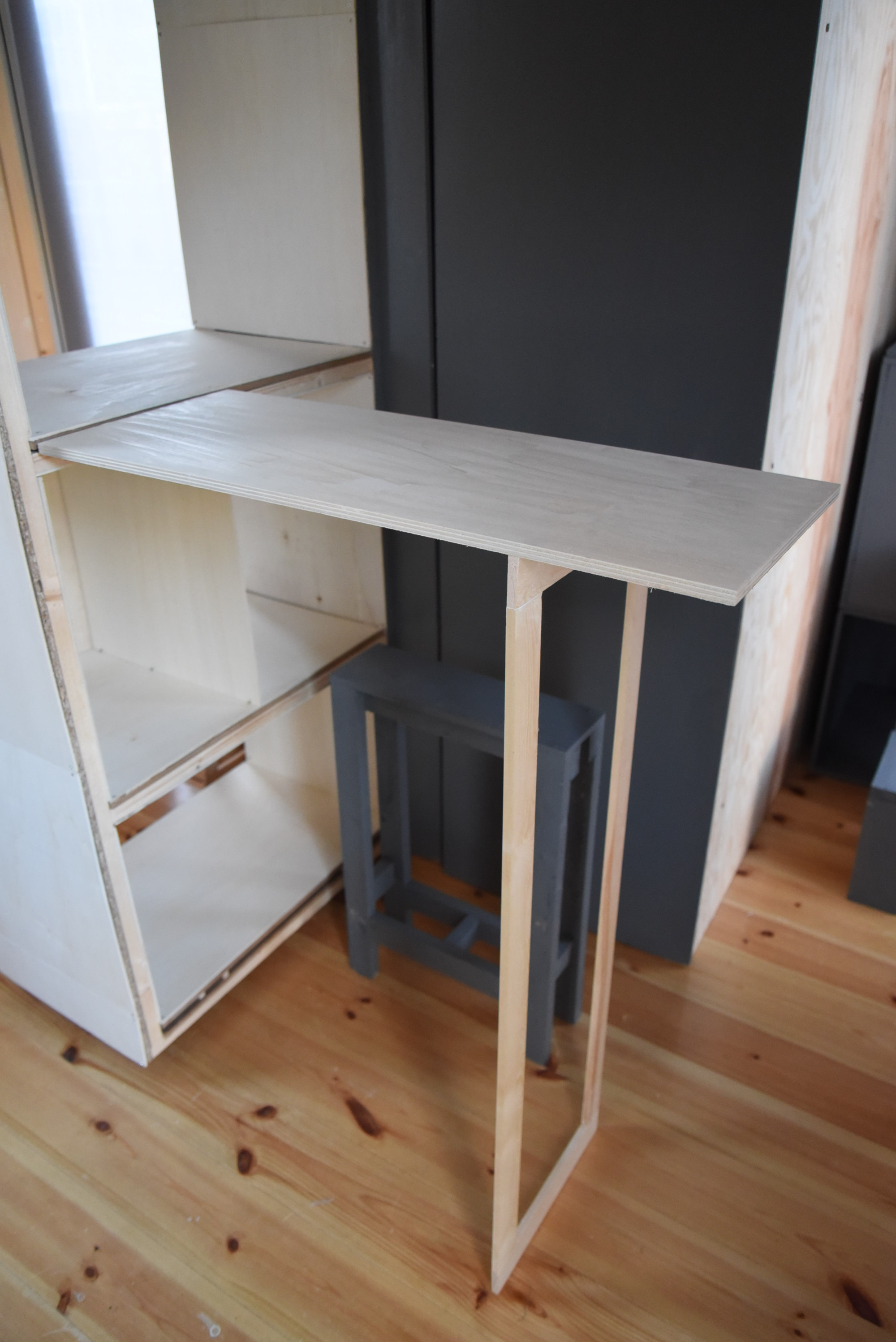 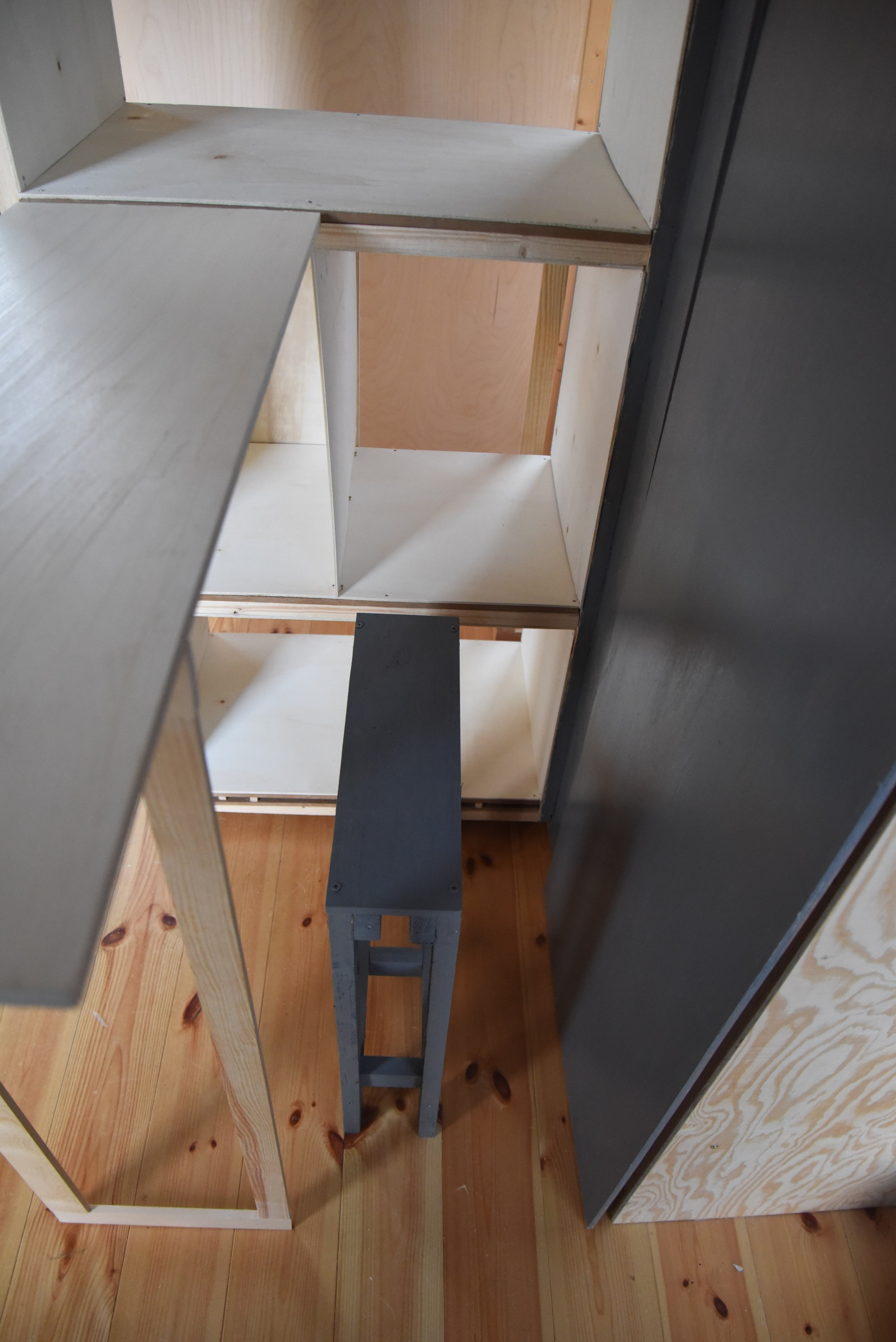 I extended the cupboard for my workarea a little further and put the two folding tables on one side and the table legs on the back of the cupboard. This made the whole more balanced and symmetrical than before.

If I would like to work, I pulled out the left side of my hidden area and turned the cupboard around 180°. I could flexibly expand the area of the tables by opening both table, for example, if I had guests and we either worked together or wanted to eat at the table. The rollers allowed the cupboard to be placed in any position and I could work directly near by the floor depth window when the sun was shining.

The table leg frame was simply placed under the folded table top and held in position by two small wood pieces. On the back of the cupboard the two leg frames are a beautiful addition to the small strips I had installed. 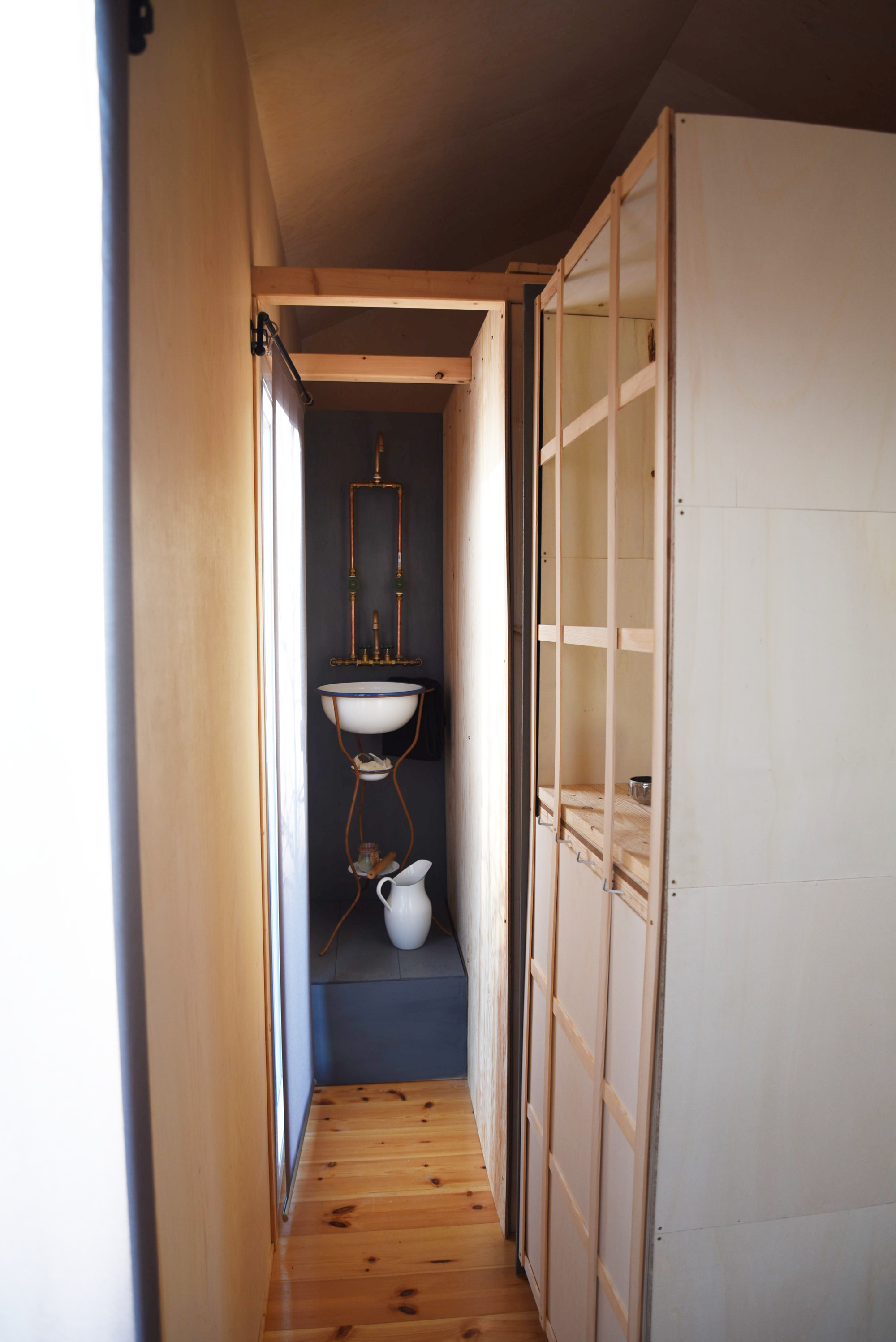 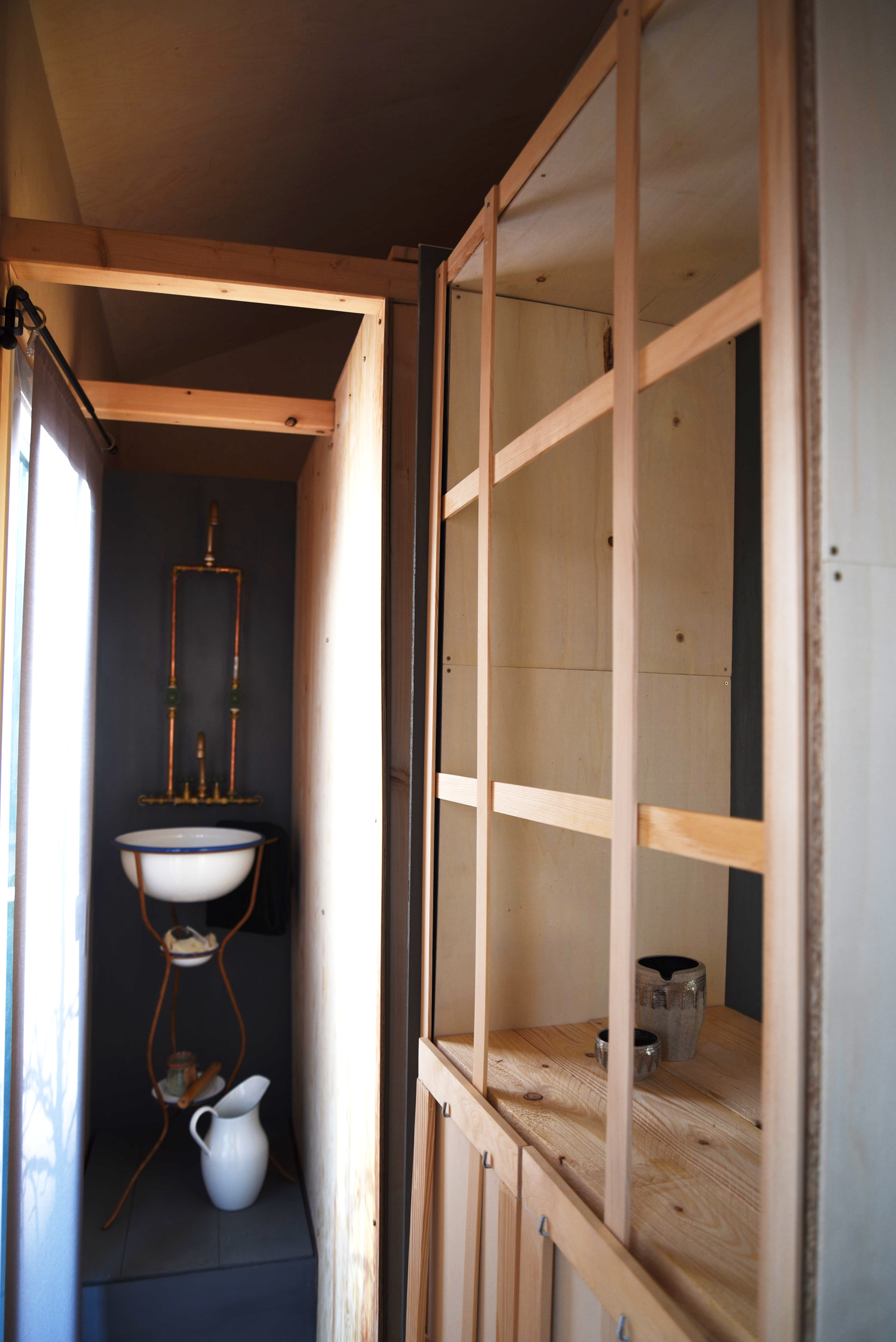 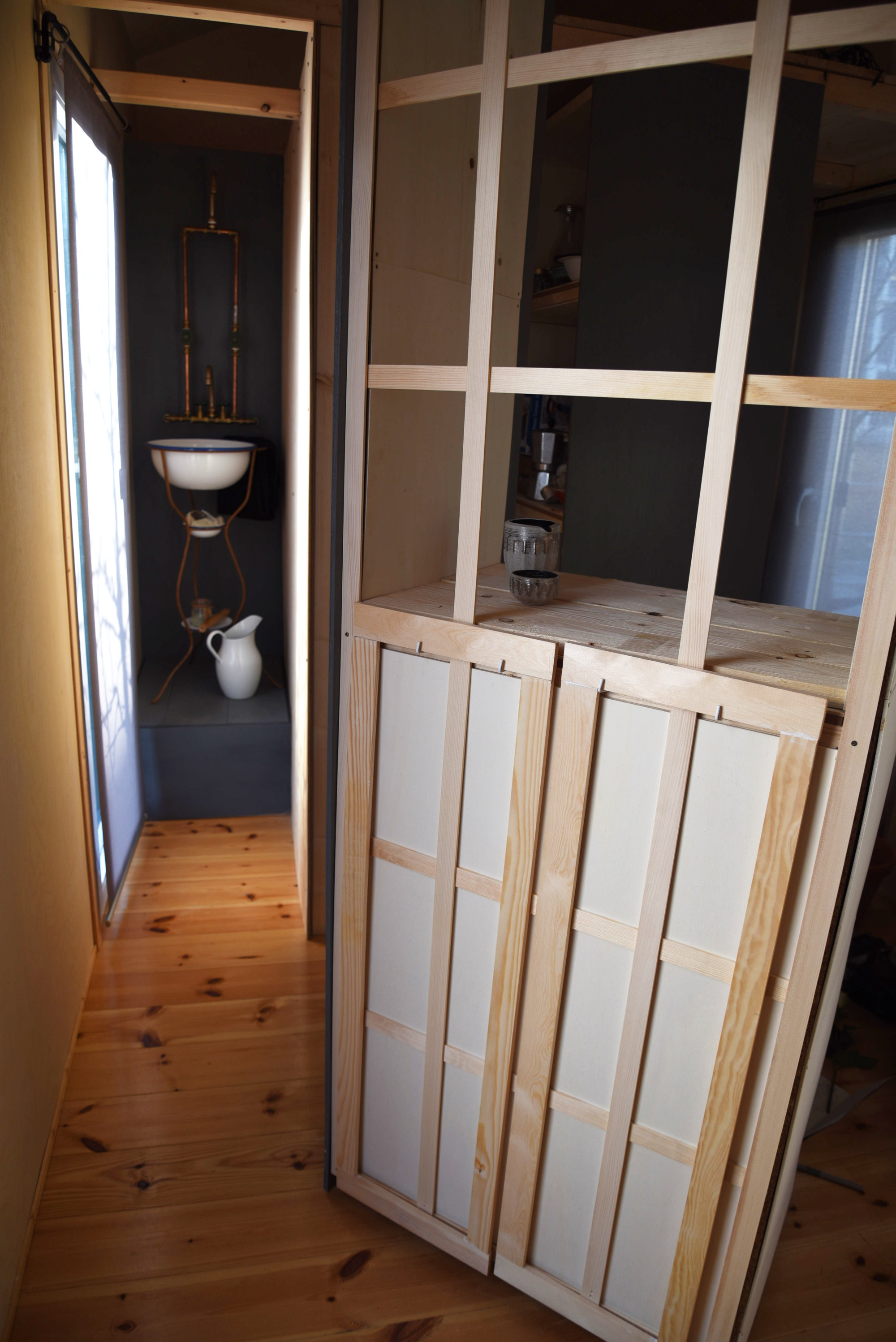 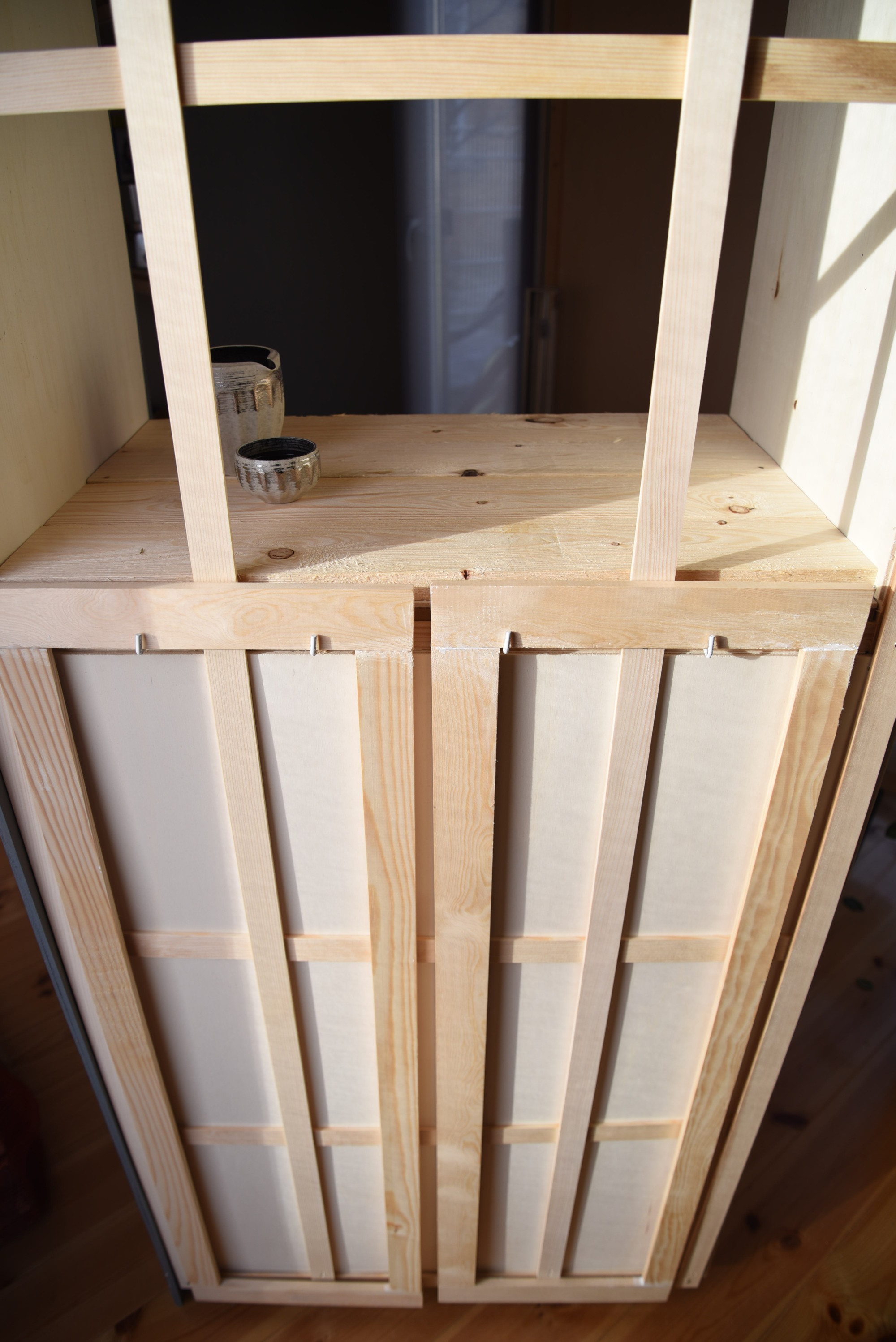 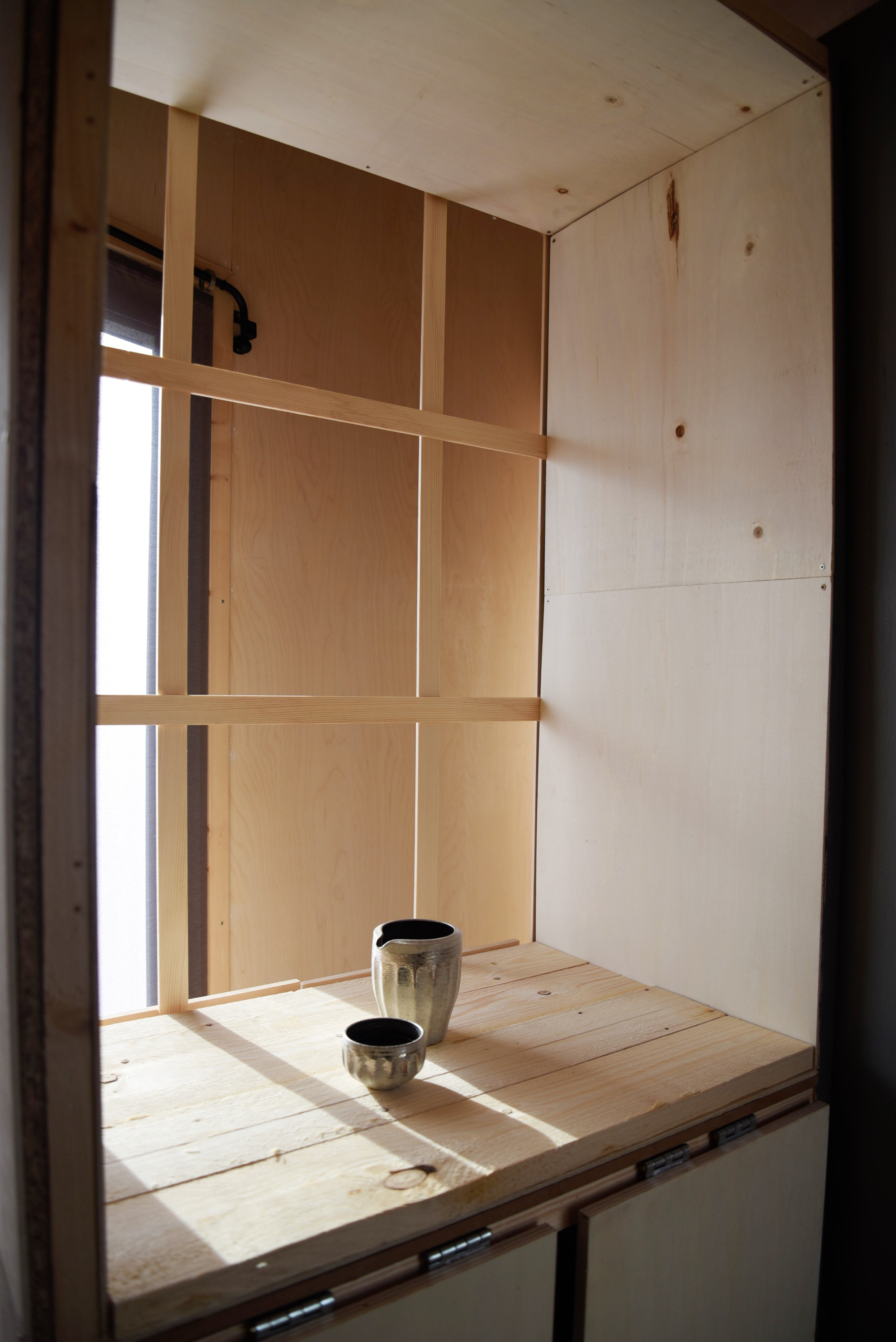 The 3rd element created a lot of space for my clothes and I could accommodate a complete wardrobe with jackets and shoes. Through the rollers I could place the cupboard in any position and pulled it out. 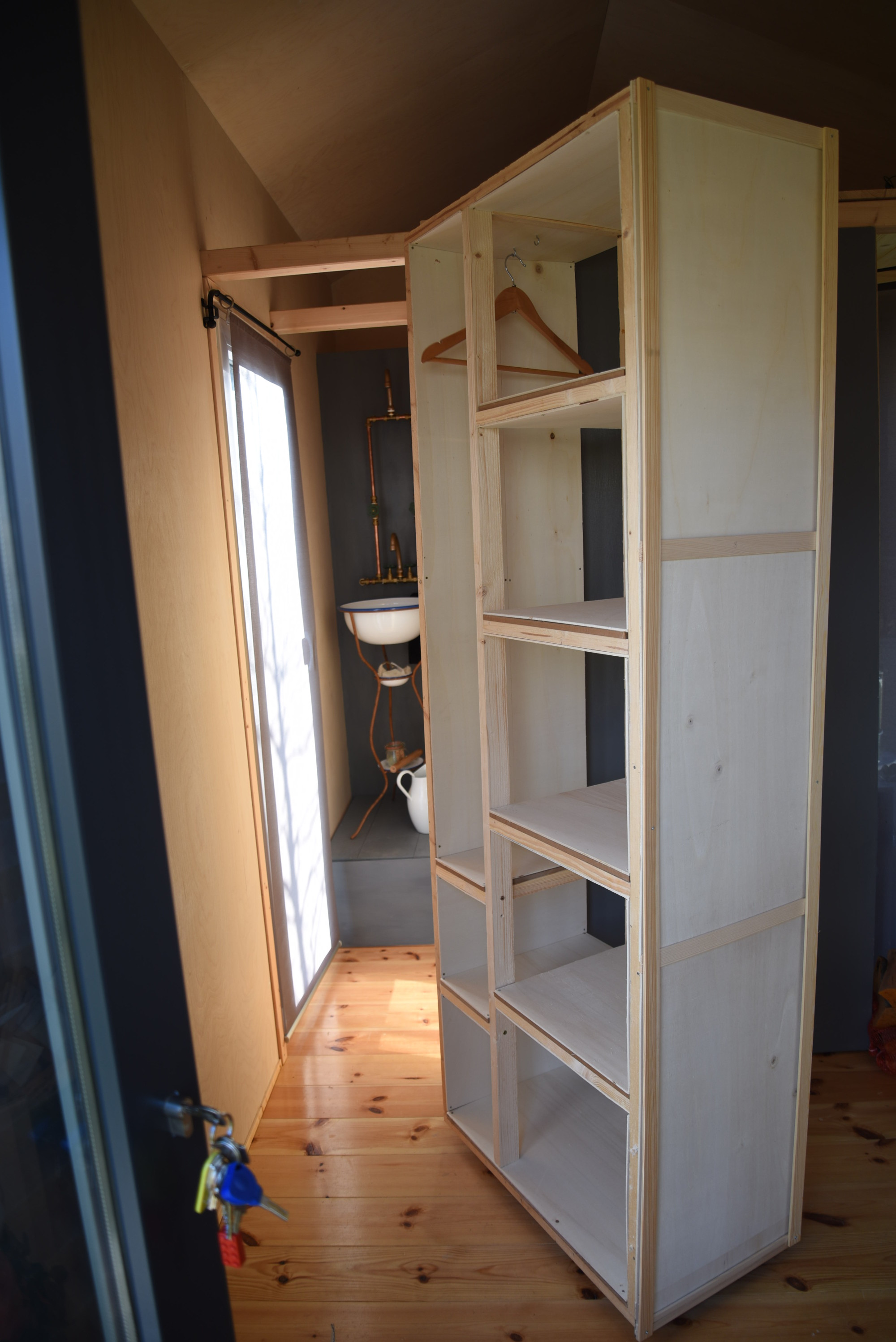 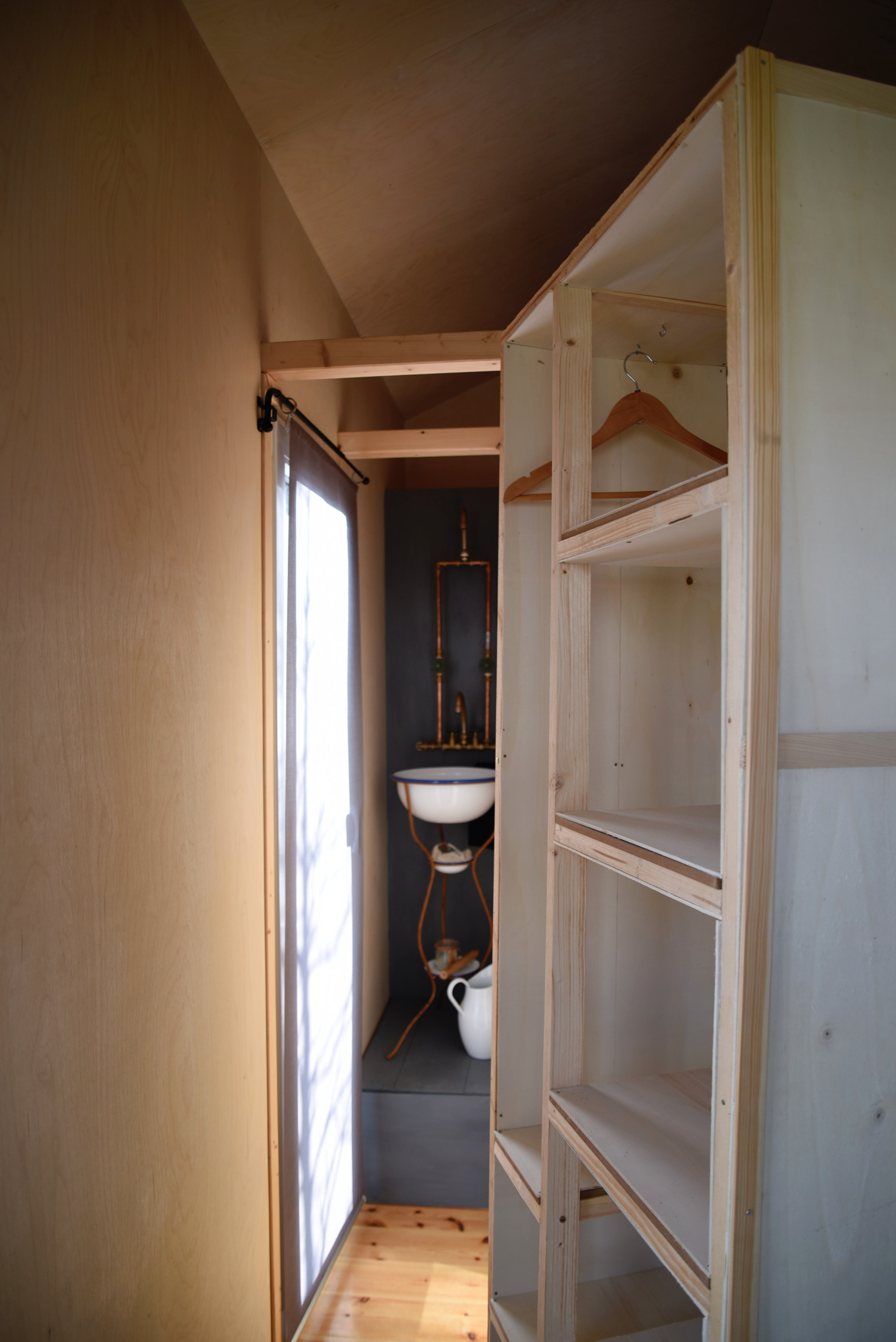 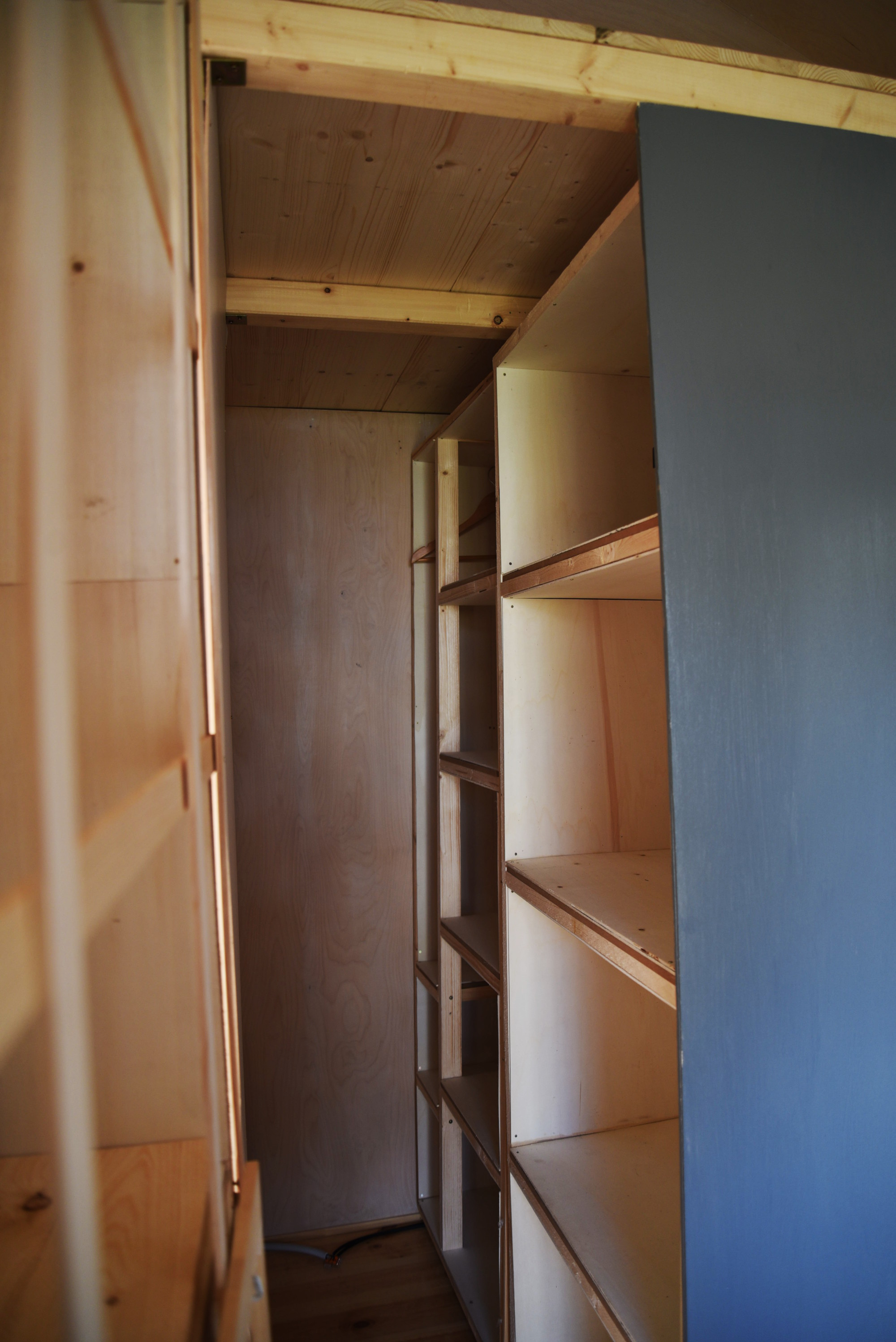 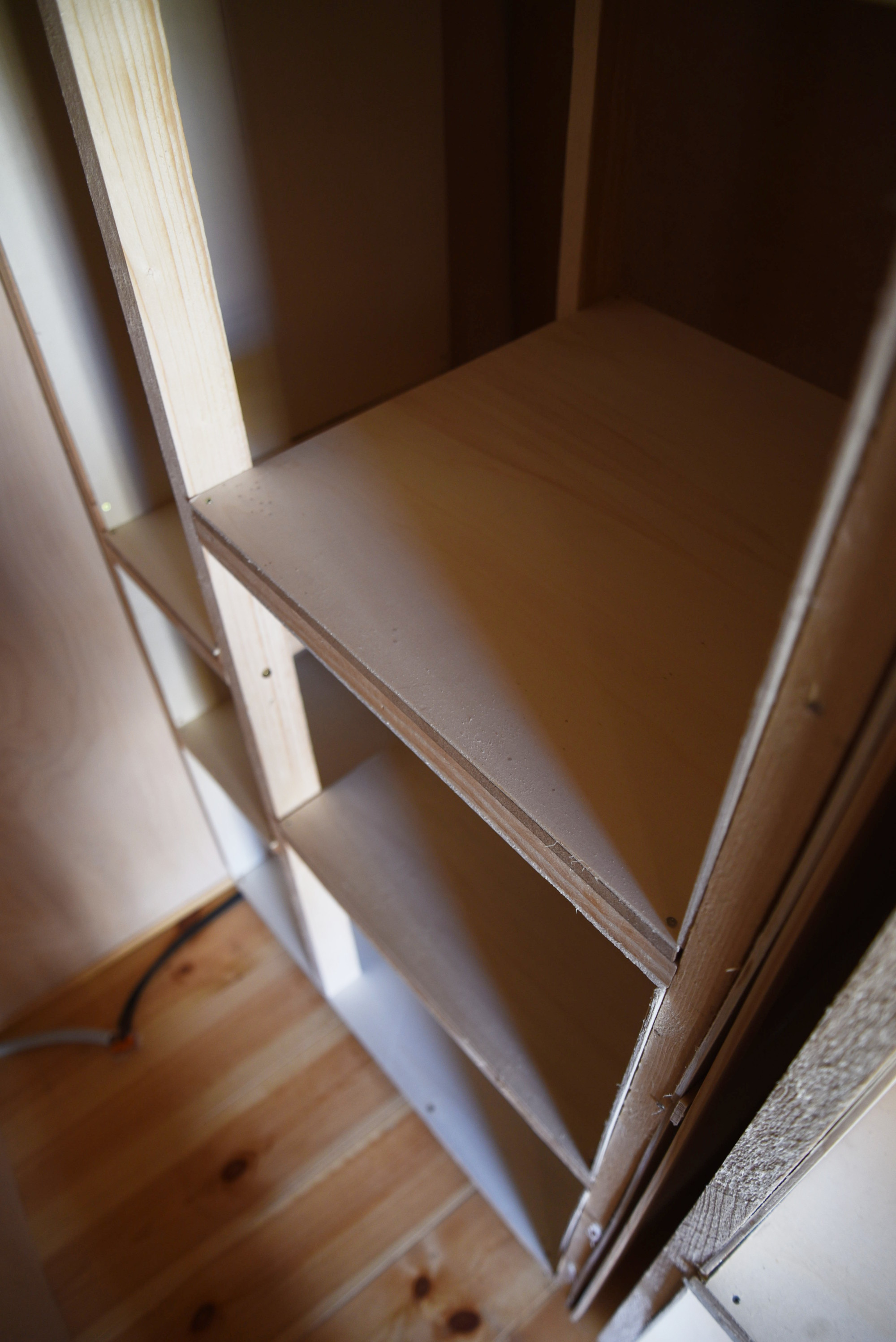 The last element of the HIDDEN AREA was build like a display for vegetables and fruits with a small tilt. This cupboard had the function of food storage and enough space to store food for several weeks for one person. When taking food the back pieces slide by the tilt forward to the front. This allowed me to always took food comfortably. 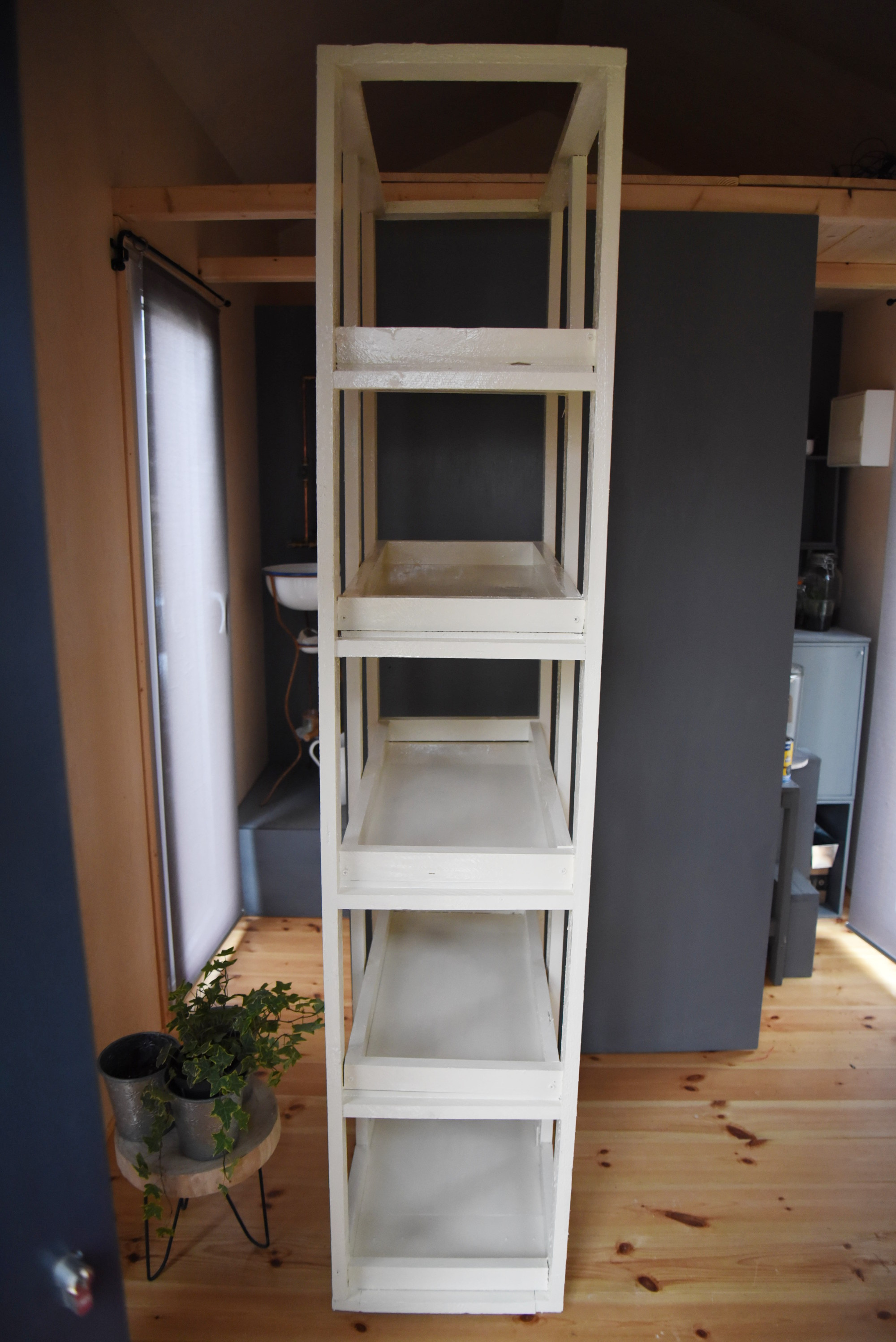 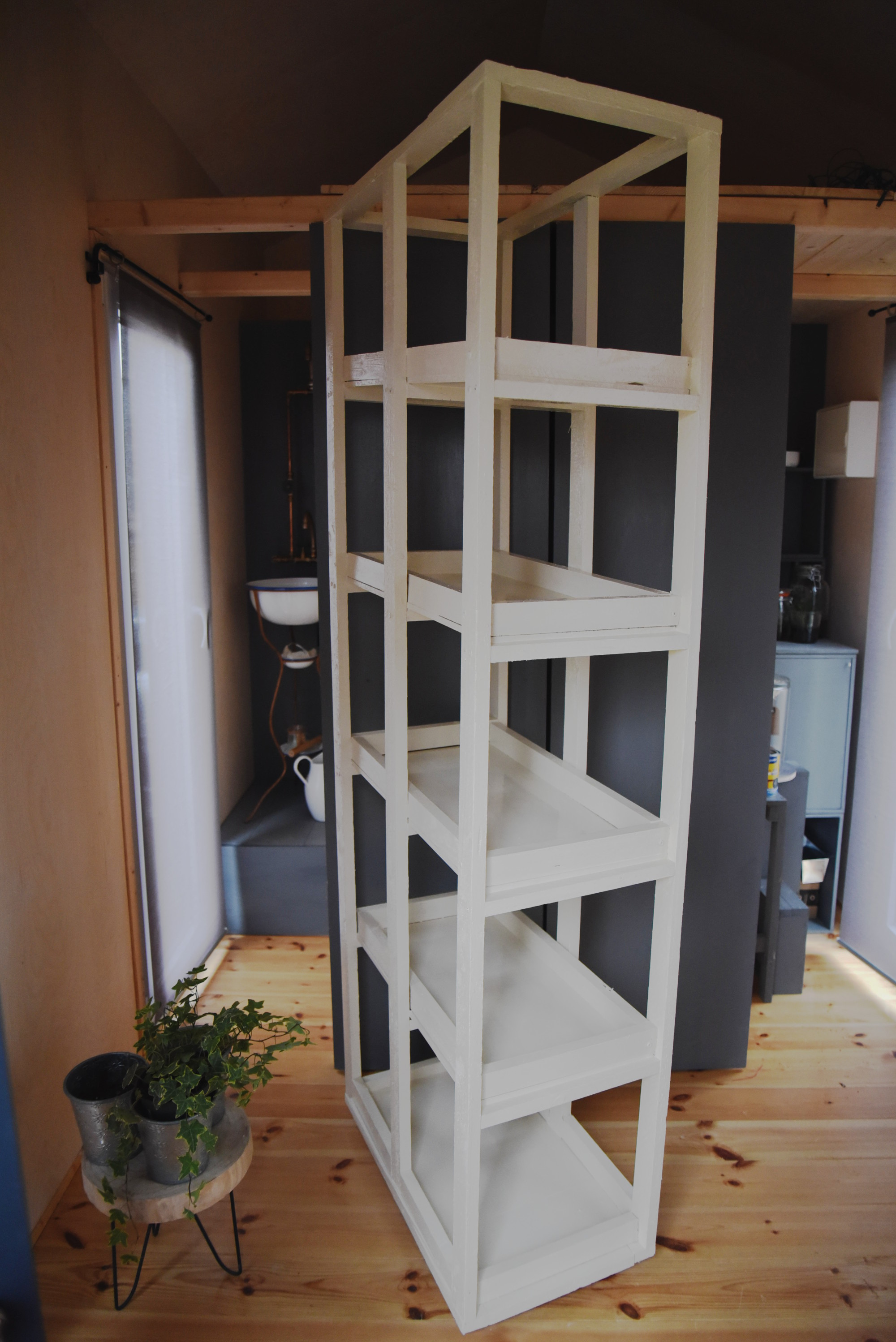 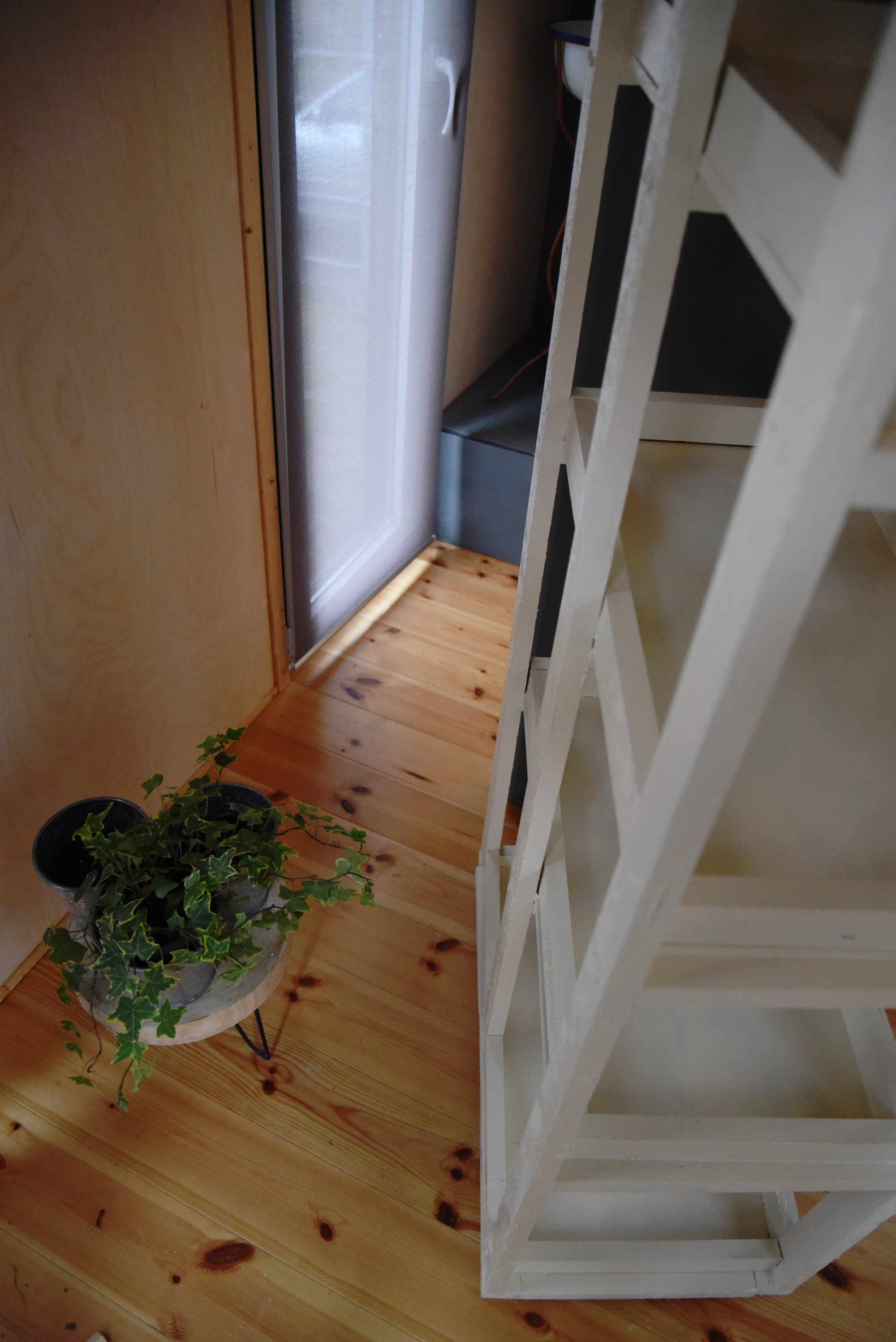 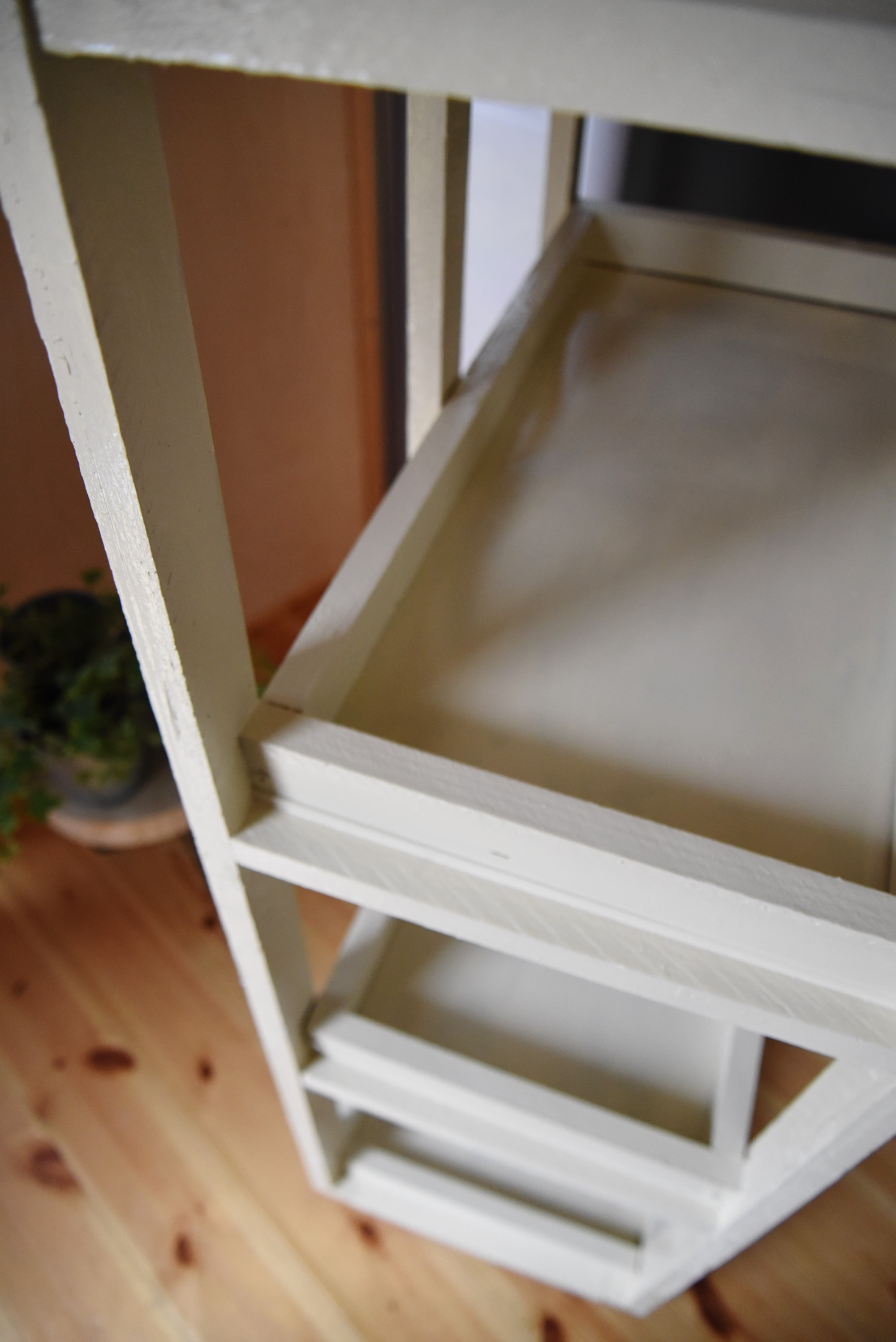 After the completion of the individual cupboards color was added to the HIDDEN SPACE to provide a spatial depth and a colorful complement to the light sand of the inside of the cupboards.

The anthracite gray harmonized wonderfully with the delicate sand-color and will be found in other areas of the house. Even if I love wood and its color, I need an optical interruption otherwise it seems fast monotonous and one-dimensional. 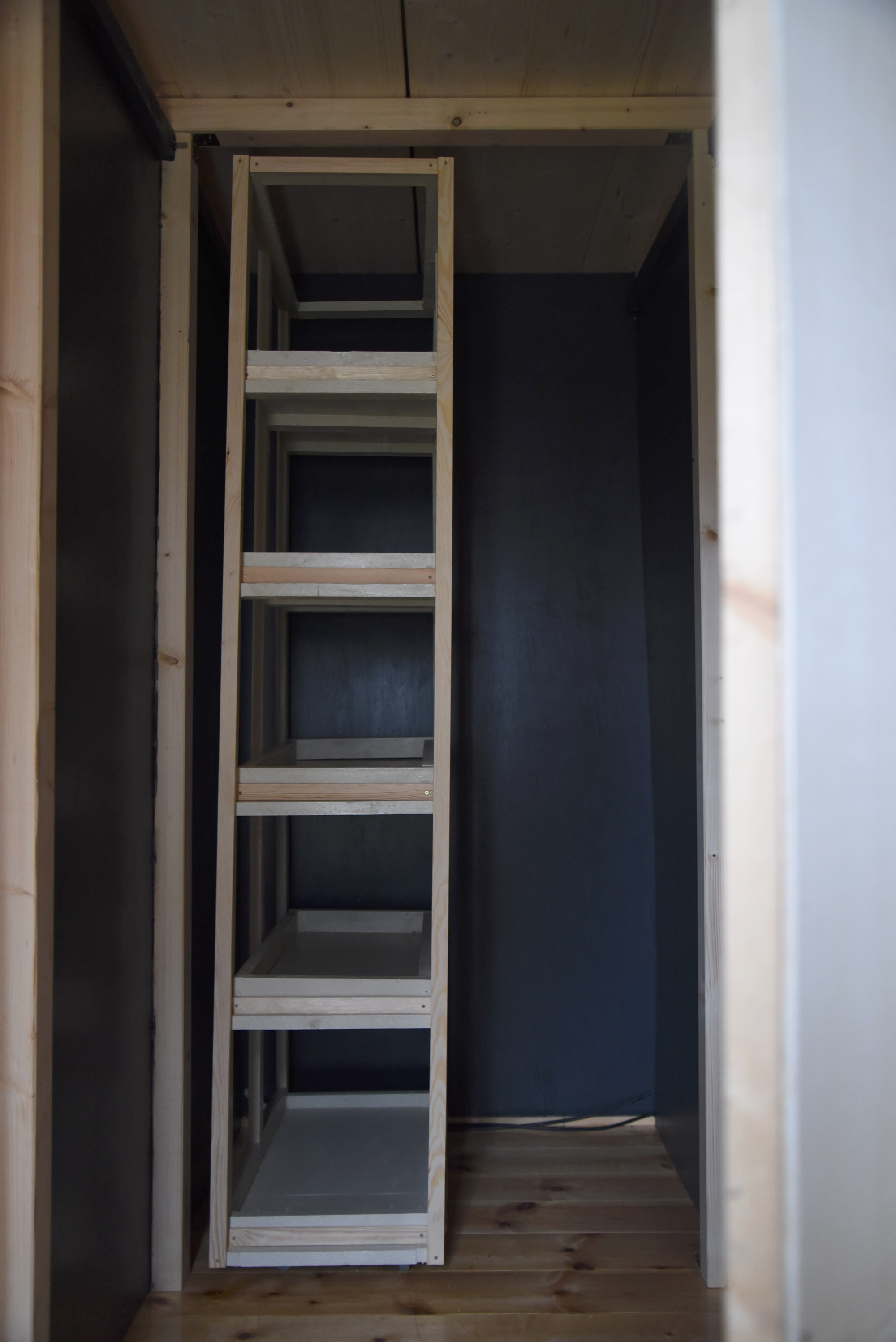 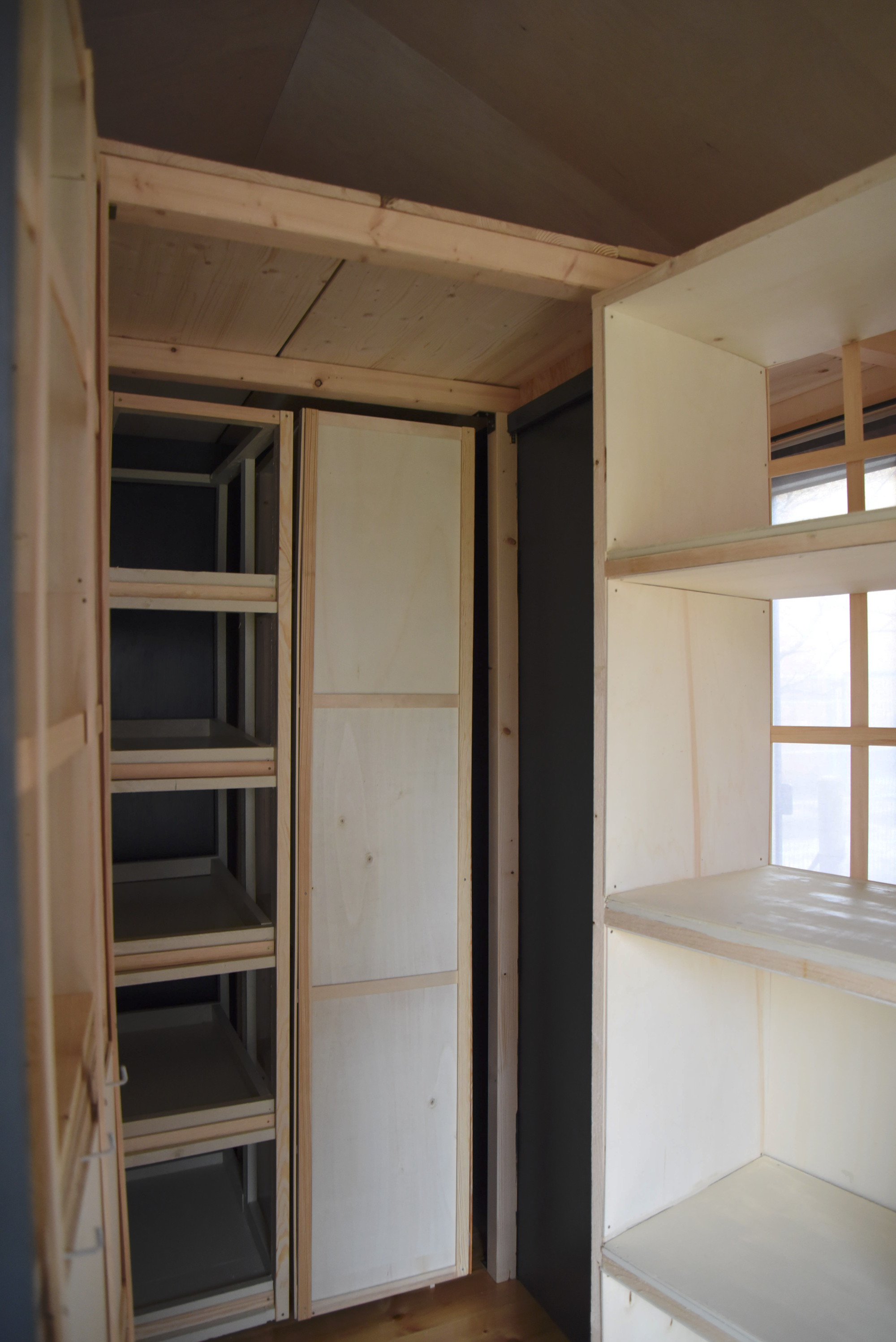 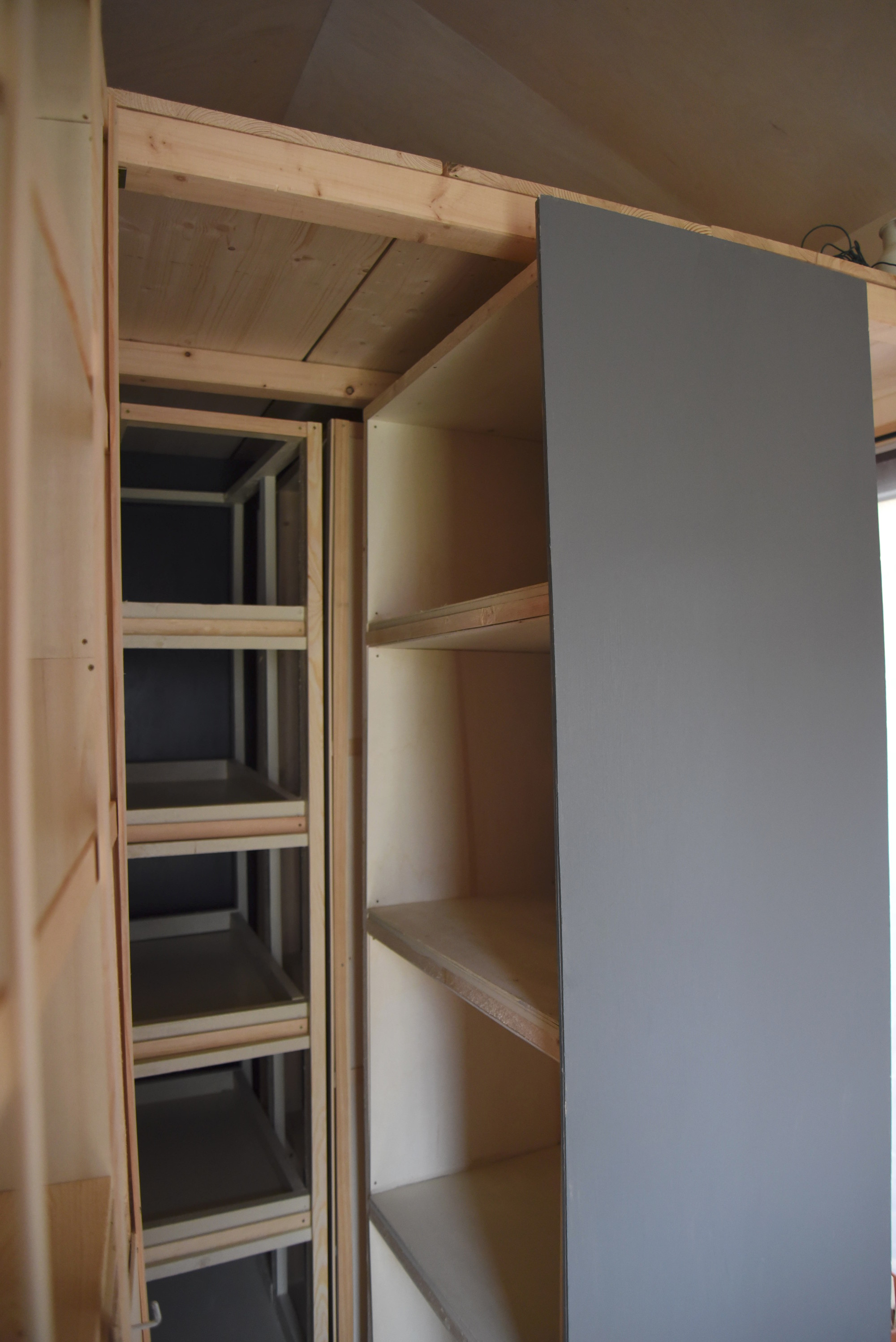 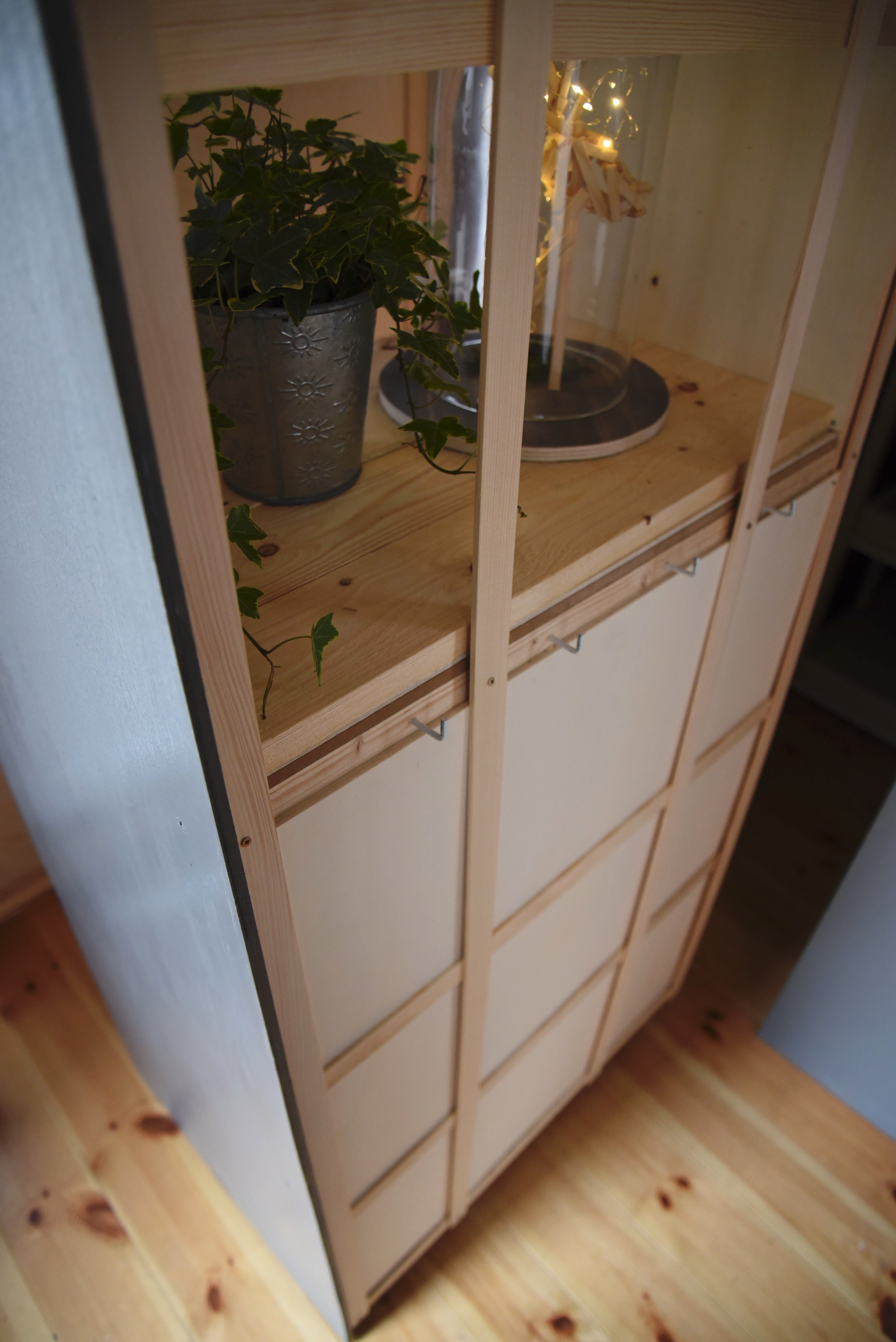